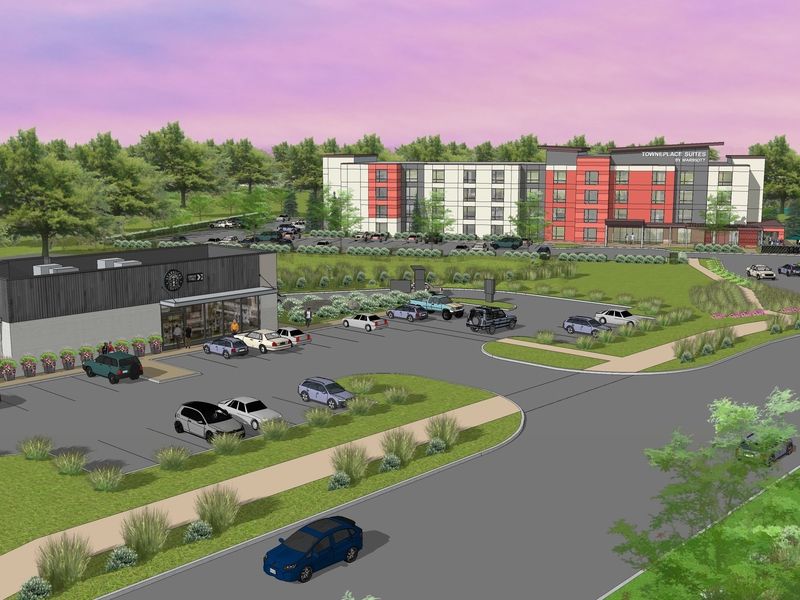 The Spire Institute and Academy has announced that it will be getting a new 89-room Marriott TownePlace Suites hotel next to its massive sports complex in Geneva, with the hotel scheduled to open around this time next year.

The hotel will have 55,000 square feet of space and four floors. It will feature a “state-of-the-art” fitness center, according to the developers, with an indoor pool and patio overlooking nearby Speyer Lake.

The hotel will be managed in the future by InterMountain Management, based in Monroe, Louisiana, which specializes in the selected service hotel and extended stay segments.

The project also includes a Starbucks that will be on Spire Circle near the entrance to the athletics academy and space for an additional retailer to be determined.

The project is being developed through a partnership between Spire and Blue Ocean, a property investment and management firm based in Owings Hills, Maryland. Other groups involved in the joint venture include Renew Partners of Montville, Ohio, and JCI Contractors of Ashtabula.

Blue Ocean refused to share the estimated value of the project. He also declined to share a rough range of what rooms might cost in the future.

Spire describes itself as a “world-class mega-facility specializing in education, training, development and competition in a wide variety of sports”. Its complex includes indoor and outdoor training facilities, including an athletics area, basketball courts, soccer fields and an Olympic-size swimming pool.

The facilities are located on 500 acres of property in Geneva with over 750,000 square feet of space under one roof in its sprawling complex. Sports currently featured on the Speyer campus include swimming, track and field, basketball, e-sports, drone racing, wrestling, and lacrosse.

Spire has an international population of students, event competitors, Olympic interns and spectators, according to the company. It offers a varied lineup and this summer announced its new wrestling program, led by Olympian Kenny Monday (who won a gold medal at the 1988 Summer Olympics in Seoul, South Korea).

Since its official opening in 2012, on-site hotel accommodation has been high on Speyer’s wishlist.

“Over the next few years, the I-90 corridor in Northeast Ohio will expand and the Spire campus will also expand,” said Bill Monicelli, Director of Land Use Planning for Blue Ocean , in a press release. “We expect that in the very near future, visitors to this area will double or even triple. The new TownePlace Suites and Starbucks will meet the needs of these visitors, for Speyer itself, as well as for the surrounding area.

The hotel should have between 30 and 50 employees, depending on the season, according to Blue Ocean.

Blue Ocean, founded in 2004, has a portfolio of real estate investments valued at more than $ 500 million that includes more than 2,000 multi-family units and 3 million square feet of retail space, according to the company.

“Spire is an exceptional resource for the global elite sports market and is a leading economic driver in and around the greater Cleveland area,” Blue Ocean President Jonathan Ehrenfeld said in a statement. “Adding these new resources to the Speyer campus increases our ability to bring more value to the local market and beyond, positioning Spire as the destination of choice for top student athletes, Olympic hopefuls, camps sports, national competitions and more.