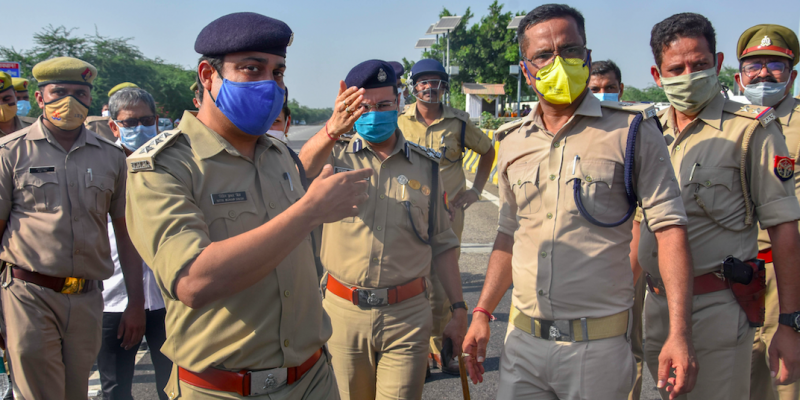 New Delhi: A 36-year-old man from Kanpur died Tuesday, September 28, following a police “car check” at a hotel in Gorakhpur, NDTV reported. Police allege the man died in an “accident” in which he fell; however, the six police officers involved in the raid have been suspended pending an investigation into the incident.

The victim, Manish Kumar Gupta, was a real estate businessman and shared the hotel room with two of his friends, Pradeep Chauhan and Hardeep Singh Chauhan, both from Gurgaon. The two men told the media that they were “business associates” in town to visit a mutual friend.

Police said officers were carrying out a routine check and became suspicious when they discovered that the three men, from different towns, were staying at the hotel with only one ID card, the India time reported.

The men had apparently come to Gorakhpur at the invitation of a mutual friend, Chandan Saini. The four men had spent the evening in the hotel room, after which Saini had left, talking about plans for visits for the next day.

According to Hardeep Singh, the police arrived in their room around midnight and asked for ID. When he asked them why they had barged into the room at such a late hour, they allegedly slapped him. Singh showed them his Aadhaar card and gave them Saini’s number, after which they woke Gupta to ask him questions.

Singh went on to say that when Gupta asked the police why they were bothering him in the middle of the night, they started beating him, after which Singh was taken out of the room. He said Gupta was dragged out of the room a few minutes later, his face bloodied. Singh went on to note that some of the police appeared to be drunk. The police then took Gupta to the hospital where he died.

Police said, however, that Gupta was visibly drunk when they arrived at the scene, resulting in slipping and fatal injuries to his face. Police also claimed to have received information about “suspicious” men staying at the hotel.

Ravinder Gaud, Deputy Inspector General (DIG) Gorakhpur, is personally overseeing an investigation into the incident based on witness statements and an autopsy report to determine the cause of death. “We haven’t ruled anything out so far,” Gaud told the India time.

Vipid Tada, chief superintendent of Gorakhpur police, upheld the police account that Gupta was drunk and injured himself as a result of an accidental slip, but he suspended the six policemen who were present at the scene . These included JN Singh, officer of Ramgarhtal station, Akshay Mishra, head of Phalmandi police station and four officers.

Suspect: Did a Marriott hotel try to take us away?