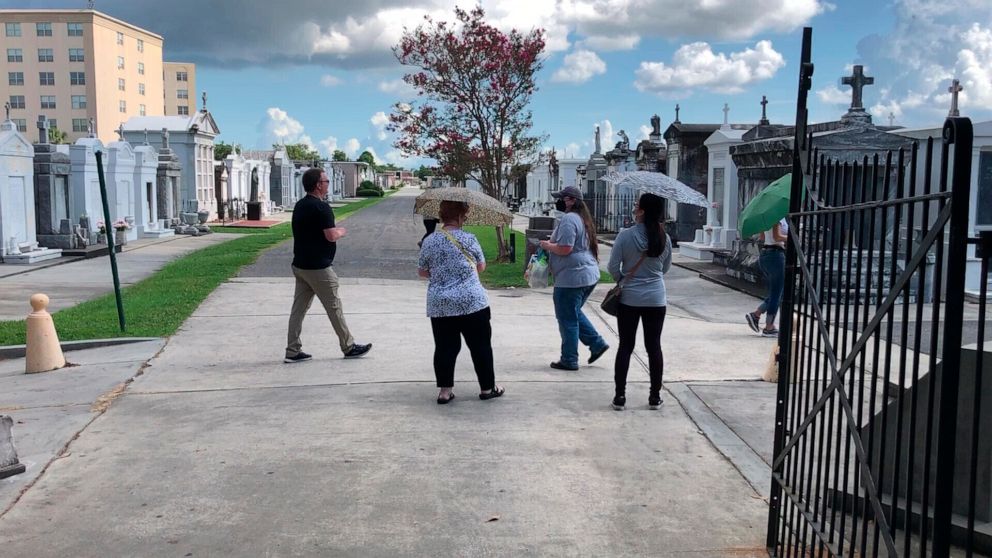 NEW ORLEANS – It’s a neighborhood bar and restaurant, but for two long weekends each year, Liuzza’s by the Track “regulars” include a bustling crowd of tourists having drinks and settling in for meals on the way to and from the nearby neighborhood New Orleans Jazz and Heritage Festival.

Co-owner James Gonczi estimates that out-of-town residents make up between 30-35% of his clientele during the seven-day festival each spring. Due to the coronavirus pandemic, the festival has not been held for two years now.

It looked like the music would be played this fall – organizers recruited the Rolling Stones to host a rescheduled festival in October. But then the highly contagious Delta variant exploded, forcing another cancellation.

Gonczi doesn’t even want to talk about it. “I don’t want to be depressed anymore,” he says.

Jazz Fest typically draws hundreds of thousands of people from all over the world to the city. They come every year for the unique food, music, and culture, playing a major role in a tourism and hospitality industry that is driving New Orleans’ economy.

This industry has been hammered by the pandemic, which has forced many bars, restaurants and concert halls to close or limit their activities. At one point unemployment in the city was as high as 20%, and it has not recovered, with an unemployment rate of 12% now.

It looked like decent times, at least, would return last spring, as vaccinations began and visitors began to return. Occupancy rates topped 50% this summer at downtown hotels, which isn’t bad compared to the single-digit numbers from the previous summer, said Kelly Schultz, spokesperson for New Orleans & Company, which promotes the city as a tourist destination. But she said there had not been a full rebound as international tourists, cruise ship passengers and business travelers had yet to return.

The tourism organization has suspended some of its ads until September, as polls have shown travelers worried about the delta’s surge. Louisiana has been a hotspot for this fourth wave, with hospitalizations repeatedly hitting record highs and medical staff expressing concerns about overflowing hospitals.

Losing the Jazz Fest again should be a ‘giant wake-up call’ to get more people vaccinated, Schultz said: ‘This is all completely preventable with the vaccine. “

Earlier this month, New Orleans began requiring anyone entering bars, restaurants, music clubs and even the Superdome to show proof of vaccination or a recent negative coronavirus test. The city and state also require masks to be worn in stores and other indoor locations, but have not reverted to closures or capacity limits for live music, restaurants and bars that were implemented when the pandemic has started.

Many companies also take their own precautions. When infections started to rise again, the Carnival Lounge reinstalled transparent shields separating the stage from the crowds. Despite this, a few groups have canceled due to concerns over rising infections, owner Jennifer Johnson said.

Live music events were one of the last things to open freely last spring, and venue operators fear they will be the first to face restrictions if hospital admissions continue to rise.

“I can’t say enough about how overwhelming it would be if the live music were to stop again,” Johnson said.

Even before the mayor’s announcement, dozens of places have already decided to impose vaccines or negative coronavirus tests. Carnival is one of them, as is Palm & Pine, a restaurant in the French Quarter blending influences from the South, the Caribbean and Central America. Palm & Pine took the plunge because their employees have children, and they noticed how many children were getting sick during this fourth wave.

While the Jazz Fest is by far the biggest event to be canceled, August has been a bleak month. An event that attracts art lovers who wear white on their gallery visits has been canceled, as has the Red Dress Run, which sends thousands of revelers scurrying through town. The September French Quarter Festival, featuring dozens of artists performing in outdoor venues, was later canceled. Now, many fear the pre-Lent parades and Mardi Gras street parties, which draw tourists from all over the world, will be closed again in 2022.

She hasn’t hosted a big catering event since Mardi Gras 2020. She has found other ways to make ends meet, including pop-ups at a local concert venue. But losing the Jazz Fest is overwhelming.

“I do all the festivals in town,” she said. “I can’t do anything right now. It hurts.”

Many still hope that this latest wave will not worsen and that this fall’s tourist season can be saved. New Orleans has a higher vaccination rate than the rest of Louisiana and neighboring states, which could be important as tourists decide where to spend their vacation money.

At the Royal Sonesta hotel in the French Quarter, the growth in activity which resumed in mid-March has stabilized. Many guests who were planning to come for the Jazz Fest have been canceled and new bookings have slowed down a bit, said Al Groos, hotel manager. If they can withstand that push, they could still have a “very, very good fall,” he said hopefully. “Not based on the 2019 standards, but on the basis of 2020,” he added.