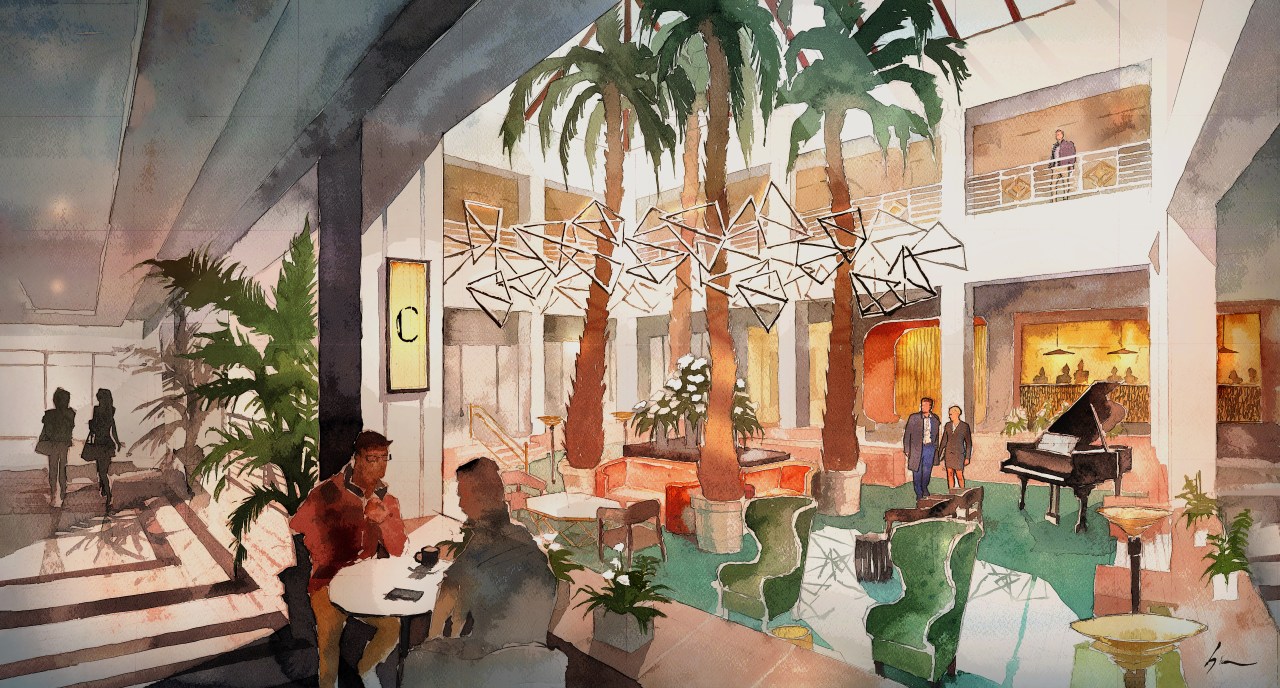 ALBUQUERQUE, NM (KRQE) – Heritage Hotels & Resorts has announced that beginning April 1, the former Hyatt Regency Albuquerque will soon be rebranded as “The Clyde Hotel.” The name change honors the legacy of Clyde Tingley, former chairman of the Albuquerque City Commission and 11th Governor of the State of New Mexico.

Molly Ryckman, vice president of sales and marketing for Heritage Hotels & Resort, said it’s part of their mission to provide an authentically local experience for guests and to invest in the community. “We feel like we’re investing back in the community when we’re able to tell the story of New Mexico to our guests and visitors and never forget the people who have made such contributions throughout history. “said Ryckman.

As for renovations, a refresh of the lobby and ground-floor public areas is underway, with plans for room renovations in the coming months. The project will take approximately two years and guests will be able to enjoy Clyde Tingley’s story as it unfolds.

“When a guest comes to check in to The Clyde Hotel, we want them to understand the importance of New Mexico’s history,” Ryckman said. “We want them to experience what’s so special about Albuquerque, and we want visitors to immerse themselves in the state of New Mexico.”

A politician in New Mexico for more than 50 years, Clyde Tingley and his wife, Carrie, moved in 1910 to Albuquerque, where he became interested in politics while his wife recovered from tuberculosis. With a successful career spanning decades, Tingley served as Albuquerque City Council Alderman, Albuquerque District Superintendent of the New Mexico State Department of Highways, delegate to the 1928, 1932, and 1936 Democratic National Conventions. and chairman of the Albuquerque City Commission.

Tingley was elected governor in November 1934 and reelected to a second term in 1936. During his tenure, Tingley was responsible for turning dirt roads into paved highways, promoting New Mexico’s unique style of tourism, planting tens of thousands of trees, create beautiful parks like Roosevelt Park, and move New Mexico into a modern future.

As governor, Tingley maintained a close relationship with President Franklin Roosevelt and was a supporter of his New Deal programs, securing large amounts of funding to enrich the state. Clyde and Carrie Tingley were also strong advocates for healthcare – especially for children – and established several new hospitals, one of which treated children with tuberculosis and was named in honor of Carrie Tingley.

“Clyde and Carrie Tingley have dedicated their lives to Albuquerque and New Mexico through public service and activism, propelling the state into the modern world. Our mission has always been focused on enhancing New Mexico’s unique cultural identity and authentic sense of place, and we are proud to tell the story of a couple who had such an impact on the fabric of Albuquerque across the Clyde. to create New Mexico’s first luxury business hotel, a hotel that will not operate as usual, but “like Albuquerque”. Clyde Tingley was a man of hope who saw greatness in New Mexico. Clyde will do the same.

The 20-story Clyde Hotel will offer business and leisure travelers a place of connection, comfort and engagement in the heart of downtown. The interior design will reflect a Pueblo Deco design motif with a touch of Western gritty and Eastern elegance, reflecting the grandeur and confidence of the Clyde Tingley ethos through a vibrant color palette of dark green hues, accents of copper, ivory, black, turquoise and chartreuse.

The atrium lobby will be reinvigorated to become an exciting and central gathering space, the heart of the hotel, which envelops guests in history and progress through vintage elements in modern art deco decor. It will become a place to see and be seen. The rooms will retain the design aesthetic of a reimagined New Mexico future with a comfortable and relaxing approach. The presence of Clyde and Carrie Tingley will be felt through refined touches.

In addition to 392 rooms and suites with views of the city and the Sandia Mountains, The Clyde offers a rooftop pool with hot tubs, 24-hour fitness center, over 25,000 square feet of reception space, a full-service business center, a contemporary wedding chapel, free Wi-Fi, valet parking and secure parking, and much more. The hotel also enjoys a convenient location in the heart of downtown, adjacent to the 600,000 square foot convention center.

“We are breathing new life into one of downtown Albuquerque’s most recognizable features, celebrating the state’s history and future as Clyde Tingley once did,” said Adrian Perez, Chairman of Heritage Hotels & Resorts. “In bringing this property into the portfolio, it was a natural move to draw inspiration from someone who has left such an indelible mark on the city’s history.”

Classic craft cocktails and premium wines set the tone, from business meetings to casual drinks. Juxtaposed with the understated sophistication of 1922 is Carrie’s, the ground floor restaurant named after Carrie Wooster Tingley, wife of Clyde Tingley. Light and airy, just like Carrie herself, the restaurant pays homage to the charm and liveliness of the philanthropic socialite with a prominent floral motif throughout the space. The menu will reflect popular and classic dishes of yesterday and today.

“The property has benefited from Hyatt Regency brand affiliation since opening in 1990. We are grateful for the brand quality provided by Hyatt. However, now is the time to share one of New Mexico’s most remarkable stories and introduce this property to the Heritage Hotel brand,” Long said.

Long acquired the property in 2013.

In addition to The Clyde Hotel, Heritage Hotels & Resorts owns and operates a collection of hotels across the state, including: